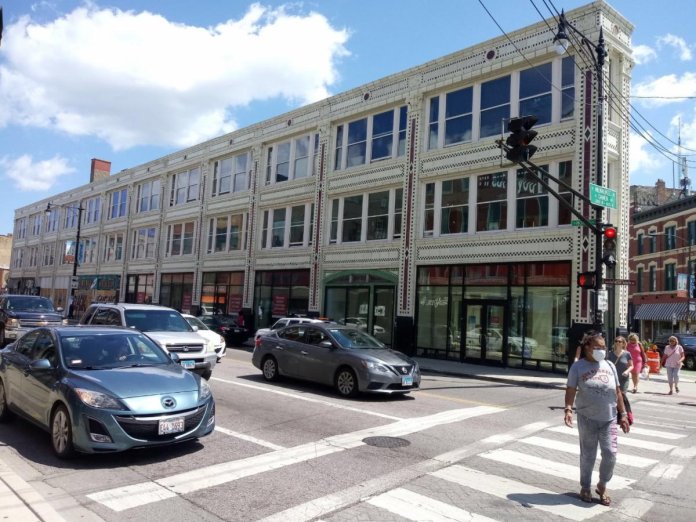 “Longtime owners of the iconic Flat Iron Arts Building in the center of Wicker Park have sold the property to a pair of local real estate developers.

“The Flat Iron Arts Building, 1579 N. Milwaukee Ave., has for decades been home to artist studios, performance spaces, cultural organizations and many other local businesses with an artistic bent.

“Since 1993, the Flat Iron has been owned and managed by Berger Realty Group, which also operates the Fine Arts Building, 410 S. Michigan Ave., and other properties in Chicago. But the company recently sold the Flat Iron Arts Building, according to a notice sent to tenants this week.

“‘Berger Realty Group has decided to transition the ownership of the building. Let me be clear: this was no easy or quick decision, and as such, we took our time finding the right people to take over the building and to continue the legacy!’ a message signed by owner Erica Berger reads.

“My father bought the Flat Iron Arts Building over 30 years ago with a vision of encouraging established as well as aspiring Chicago artists. I’m glad that as we step away to focus on other projects, we were able to identify a Chicago-based firm with owners who are engaged in the city and in the arts. We believe their experience, coupled with their appreciation and understanding of the building and the neighborhood, will be fruitful and beneficial for the community in the decades to come,’ she wrote in an email.

“The building’s new owners are Savas Er, principal of North American Real Estate, and real estate investor Buzz Ruttenberg, who has long been a supporter of the arts in the Chicago.

“Reached by phone Wednesday, Er said he and Ruttenberg plan to keep the building’s artist studios in place. Their main focus will be expanding retail options in the building, he said, including in the vacant storefront at the corner of Milwaukee and North avenues.

“The Flat Iron Building has long been an epicenter of arts and culture in Wicker Park. Local tour guide Gordon Meyer said when he first moved to the neighborhood in 2005, he was amazed by the ‘labyrinth’ of studios and art spaces in the building.

“Over the years, the building has been “ground zero for the artistic renaissance of this neighborhood. [Like] back in the ’70s when it was turned into below-market art studios, expressly so artists can move in,’ Meyer said. ‘And then now, all these years later, it’s kind of the last vestige … of an artistic center in the community.’

“‘There used to be a lot more studios and galleries and things around. But as property rates improved, I don’t think there are as many of those as there used to be, but the Flat Iron has hung on,’ Meyer said.” (Myers, Block Club Chicago, 11/3/22)

Wicker Park’s Flat Iron Arts Building Sells To New Owners For First Time In 3 Decades; The building has long been home to artist studios, performance spaces and other businesses. New owners plan to keep the studios in place while focusing on bringing in more retail, Quinn Myers, Block Club Chicago, 11/3/22