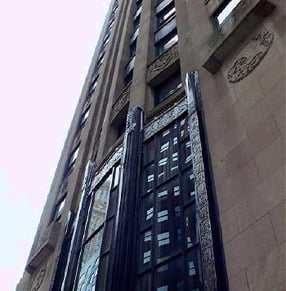 The Chicago Motor Club is an elegant example of Holabird and Roche’s Art Deco skyscraper artistry, although it rises only 16 stories. Located at 68 E. Wacker Dr., it boasts a streamlined façade with decorative metal spandrels and medallions evocative of the period. Equally important, this gem from 1928 includes an intact two-story lobby that celebrates the early days of the country’s burgeoning automobile culture. Built as the new headquarters for the Chicago Motor Club, its lobby includes a mural by noted Chicago artist John W. Norton that maps out 19 major auto routes across the country.

Preservation Chicago became concerned in 2009 that the stymied plans to repurpose the building as a boutique hotel had left it vacant for too long, leaving it at risk for deterioration and potential demolition.

Update:On May 5, 2011 the Commission on Chicago Landmarks voted to Preliminary Landmark the Chicago Motor Club building.  This could not have happened but for the leadership of Brendan Reilly, Alderman of the 42nd Ward.

The action was prompted when, in the fall of 2010, it was announced that the building was in foreclosure and that the owner had declared bankruptcy.  On March 25 of 2011, Crain’s Chicago Business reported that, after a failed attempt by Virgin Atlantic to convert the building into a boutique hotel, a bankruptcy judge approved a public auction for the building.

The auction occurred on June 23, 2011 and the winning bidder was Aries Capital, a mortgage bank based in Chicago which had held the former developer’s mortgage. In early 2012, Aries consented to the Landmark designation as a means to facilitate a future Class L property tax incentive, possibly for a boutique hotel.