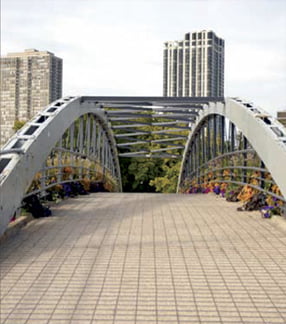 The North Avenue Pedestrian Bridge was considered a triumph of engineering and design when first constructed in 1938. It possesses the unique characteristic of having a very long span with no central support, affording a minimum of visual obstruction to motorists on Lake Shore Drive. The stunning impression from a distance is that of a long, low, and graceful arch linked by an overhead grid of crossed steel beams. Suspended from many vertical cables is the pedestrian roadway. However, because this once-revolutionary bridge does not meet modern accessibility requirements, its future could be doomed.

In 2003, city officials and the Chicago Department of Transportation (CDOT) determined that the North Avenue Pedestrian Bridge was non-compliant with federal accessibility standards and needed to be replaced.  A 2005 design competition, won by PSA-Dewberry of Peoria, Illinois, calls for a sweeping curvilinear design.  However, they did not recommend preservation of the historic bridge.

Update:Since the 2007 Chicago 7 listing, the North Avenue Pedestrian Bridge has been repaired and repainted and is still in use.  Funds to replace the bridge are apparently no longer available.  However, there has been no written commitment to preserve the bridge and it remains unlandmarked and thus unprotected from future demolition.