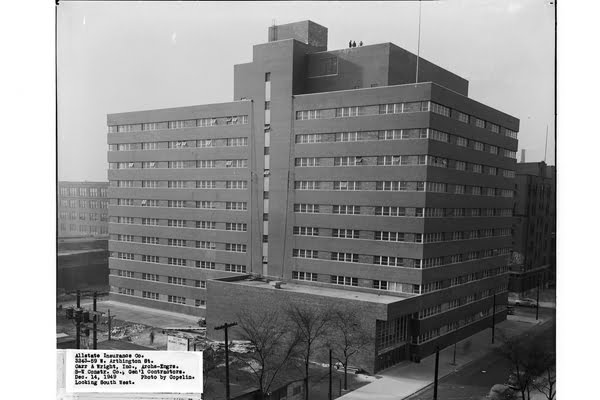 Overview:
Designed by the noteworthy architectural firm of Carr and Wright, the Allstate Headquarters Building is a rare example of immediate post- war modern high-rise construction in the city of Chicago. It was the first multi-story building constructed in Chicago since the beginning of WWII and its unique elements make it a clear candidate for reuse and reservation. Completed in 1949 as the national headquarters for the Allstate Insurance Company, it is an important contributing structure and respectfully compliments the noteworthy collection of other buildings on the Sears campus.

History:
The Allstate Corporation, a wholly owned subsidiary of Sears, Roebuck and Company, had outgrown its headquarters in the Civic Opera Building by the 1940s and was looking for new space for its national headquarters. Allstate decided to construct a brand new structure on the campus of its parent company, Sears Roebuck and Company. Carr and Wright were chosen as the architects. The firm was Sears’ corporate architects, and George W. Carr and Clark C. Wright along with George C. Nimmons, who retired from the firm in 1944, had previously designed the rest of the Sears complex, including its distinctive tower, as well as many architecturally notable Sears retail outlets in Chicago and across the country. The unique structure that the firm produced was clearly a product of its time and one of the most significant immediate post-war structures in Chicago. In fact, it was the first multi-story building constructed in Chicago since the start of World War II. Designed to fit in with its surroundings, the two color tones of brick matched well with the rest of the complex. But the new building, completed in 1949, stuck a modern chord. Metal-framed double hung windows accentuated the horizontal bands of the 10-story structure and the interior featured marble and terrazzo finishings. Innovative technological elements included air-conditioning and centralized climate control throughout and extensive use of interior fluorescent lighting.

Threat:
The building has stood vacant and deteriorating for a number of years. While the rest of the Sears complex has seen significant redevelopment efforts, including the award-winning Power House High reuse in the former powerhouse, Allstate has been neglected. If a reuse for this important building is not found soon, demolition may be the next step.