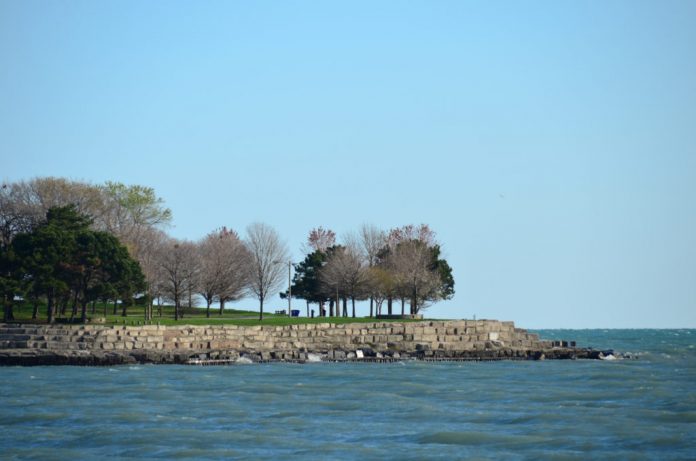 Promontory Point, near 55th and Lake Shore Drive, was conceived as part of Daniel Burnham’s Plan of Chicago and featured a limestone stepstone block revetment. This particular revetment design is unique to Lake Michigan and once was the shoreline treatment for most of Chicago’s lakefront –until the Chicago Park District’s demolition and replacement project. In 1937 Alfred Caldwell, who had worked under Jens Jensen, designed Promontory Point.

In the 1980’s Chicago’s shoreline was threatened by high Lake Michigan water levels. The Chicago Park District, the Army Corps of Engineers and the City of Chicago developed a plan to rebuild the limestone step revetment along the lakefront. They signed a Memorandum of Agreement in accordance with the Secretary of the Interior’s Standards to ensure that the project would protect the historic value of the structure. However, when construction actually began in the 1990’s the public was appalled — long unrelieved stretches of steel and concrete where the historic limestone had been. After all but two sections of the lakefront had been ruined — Promontory Point and Diversey-Wellington — the Illinois Historic Preservation Agency halted the project. But in July of 2006 the IHPA, under by a riptide of political pressure, endorsed the concrete and steel reconstruction.

Update:Congressman Jesse Jackson, Jr, has carried through the House an amendment that would restrict federal funding to the preservation of Promontory Point. The amendment awaits action in the Senate.