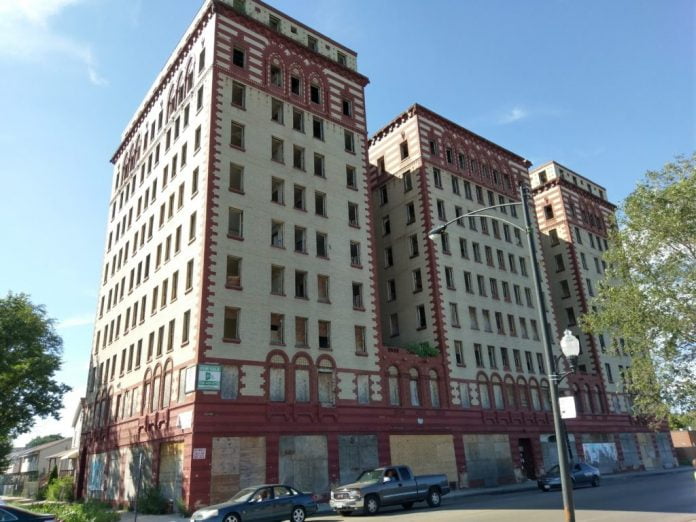 OVERVIEW:
Originally part of a large commercial business district on the city’s West Garfield Park neighborhood, the long and steady decline of the community has only further made the rehabilitation of this rare and magnificent Moorish Revival hotel more challenging. Constructed of red and cream brick with deep red terra cotta detailing, the Guyon Hotel’s interior is also in need of restoration. The site has had multiple owners over the years and was finally converted from a residential hotel to single-room-occupancy apartments in the late 1980s. Listed 2012 on Landmarks Illinois’ 10 Most Endangered list and last year on our Chicago 7 list in 2013, the Guyon’s sheer magnitude and scale make the structure a formidable building to renovate and restore.

HISTORY:
The Guyon Hotel (also known as the Hotel Guyon and “The Guyon”) was designed by Jensen J. Jensen (no relation to the famed landscape architect) in 1927 after being commissioned by local businessman and ballroom dancing impresario J. Louis Guyon, of French-Canadian descent. A club owner and dance instructor, Guyon found little success in the hotel business, mostly due to the nasty reputation of mob ties to Al Capone. The hotel, built for $1.65 million dollars ($22 million in today’s dollars) remained under the ownership of Guyon until 1934, at which time it was sold. It was sold again in 1964, but after the upheaval from the 1968 riots following the assassination of Martin Luther King, the area began a steep decline leading to the transition of Guyon into a single-room-occupancy dwelling. Never a profitable hotel, even at its inception, the Guyon suffered through numerous attempts to rehabilitate it over the next 30 years. Its most famous resident, however, may have been former President Jimmy Carter, who stayed there for a week while in the city working for Habitat for Humanity. Today, The Guyon stands vacant, deteriorating and in need of a sympathetic redevelopment plan.

THREAT:
Late last year the city of Chicago allocated funds to demolish the building. Preservation Chicago advocated for more time and encouraged new discussions for re-use which, as of this writing, appear promising. However, the building still remains vacant and in need of redevelopment and investment. While the building is on the National Register of Historic Places it has no legal protection as a local landmark, making it a candidate for possible demolition and development.